What to Know About Lyme Disease


What are some of the signs and symptoms of Lyme disease? That's exactly what you'll discover here.

Medical experts usually divide Lyme disease into 3 different stages – based on how long you’ve been infected. Each stage comes with its own unique symptoms.

So let’s start by taking a look at the symptoms of the first stage of Lyme disease: early localized Lyme.

If you have Lyme disease, you might experience the following symptoms within the first 30 days after the infected tick bit you:

“Bull’s-eye” rash – The most clear-cut sign of a Lyme infection is a round (or oval), red rash – at least 5 centimeters across – that expands outward as time goes by. The rash begins at the site of the tick bite and often takes on a “bull’s-eye” or “target” appearance, with a reddish center and outer edge. What else should you know about this rash?


Flu-like symptoms – A Lyme infection can trigger flu-like symptoms, including fevers, chills, headaches, swollen lymph nodes, and a sore throat. So if you’re having flu-like symptoms in the middle of the summer (and you’ve been outdoors in areas where ticks live), take note: Lyme disease could be the culprit!

If you have the “bull’s-eye” rash, definitely get medical attention – and treatment – right away. Time is of the essence because Lyme bacteria can keep multiplying and spreading throughout your body – and harming your health – until you receive treatment.

If you experience other symptoms within the first 30 days after a tick bite – but not the rash – consult with your doctor, who will advise you on the next steps to take.

Within about 3-10 weeks after the tick bite (and the start of the Lyme infection), you might notice symptoms like:

Lyme arthritis – Within the first several weeks after a Lyme infection, you might experience muscle and/or joint pain that moves from one joint to another. These symptoms can come and go for hours or days at a time [3].

Difficulty controlling your facial muscles – This usually affects just one side of your face and can lead to facial paralysis or Bell’s palsy. Researchers think that Lyme disease causes at least 1 out of every 4 new cases of Bell’s palsy (in the parts of the country where Lyme disease occurs) [4].

Heart palpitations (a pounding heart), chest pain, light-headedness or fainting, and shortness of breath – These symptoms can occur if the Lyme bacteria infect your heart and disrupt its function [5]. Estimates suggest that Lyme bacteria invade the heart in about 4% - 10% of people with untreated Lyme disease, and that this usually occurs roughly 3 weeks after the infection begins [6]. However, Lyme disease bacteria can attack the heart more than 6 months after the infection first starts! The heart complications caused by Lyme disease can be fatal, though this is very rare [7].

Flu-like symptoms – This can include fevers, chills, headaches, swollen lymph nodes, and a sore throat.

Other possible symptoms include:

Don’t hesitate to talk with you doctor if you experience these symptoms in the 3-10 weeks after you suspect a tick bit you. Also, if several weeks have passed after the tick bite, consider taking the at-home Lyme Test to see if your symptoms might be the result of a Lyme infection.

(Why wait several weeks before testing? It’s because this test is based on IgG and IgM antibodies in your blood, which take several weeks to build up after an infection starts.)

If a Lyme infection isn’t treated promptly, Lyme bacteria can keep reproducing and invading different parts of your body – causing often-dreadful symptoms long after you were first infected.

So what symptoms might you experience in the months – and even years – after a Lyme infection begins? Here are several:

Lyme arthritis – Though arthritis – joint pain and stiffness – can occur within the first few weeks of the disease, it usually develops months later (generally about 6 months later) [8]. It is a very common symptom of Lyme disease: among people with untreated Lyme, around 60% will suffer from arthritis of some kind several months after the disease starts [9]. Arthritis symptoms especially affect large joints, like the knee. Shoulder, ankle, elbow, hip, and wrist joints can also be affected.

Skin symptoms – Skin symptoms can arise in the months and years after the Lyme infection first began. In some cases, people experience a small, bluish-red swelling of the skin on an earlobe or nipple [10]. This, however, is quite rare.

Do some of these symptoms line up with what you’re going through? If so, it’s important to bring this to your doctor’s attention. You may also want to take a blood test for Lyme disease – something you can now do at-home with the Everlywell easy-to-use Lyme Disease Test – to see if a Lyme infection could be causing your symptoms. 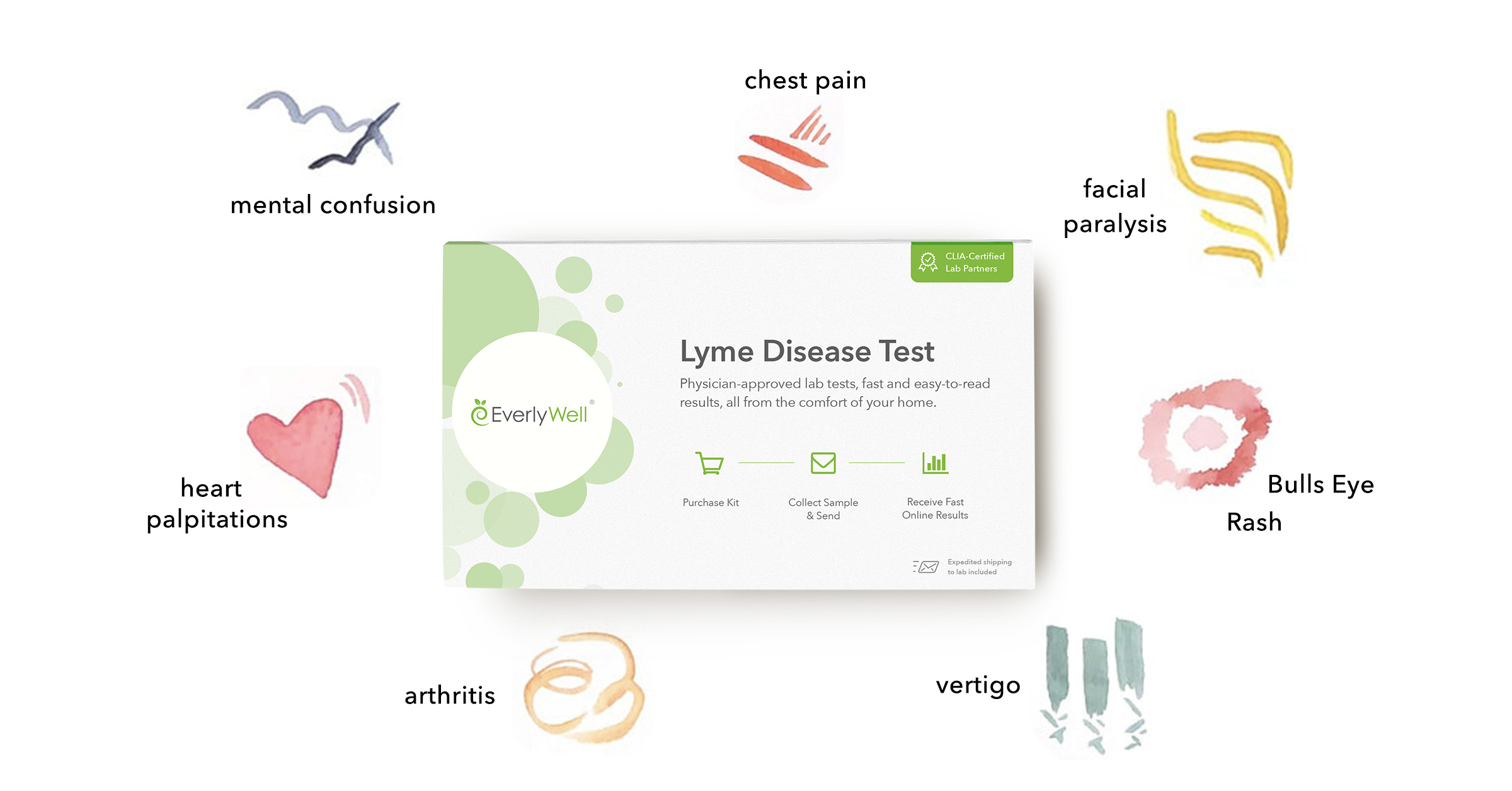 See if a Lyme infection could be causing your symptoms with EverlyWell's easy-to-use Lyme Disease Test.