This at-home test will check for the sexually transmitted infection syphilis, all from the privacy of your own home. This syphilis test kit includes everything you need to collect a sample at home and easily send it to a lab—plus, you can securely view your results online.
Measures
Exposure to Syphilis Bacteria
Collection Method 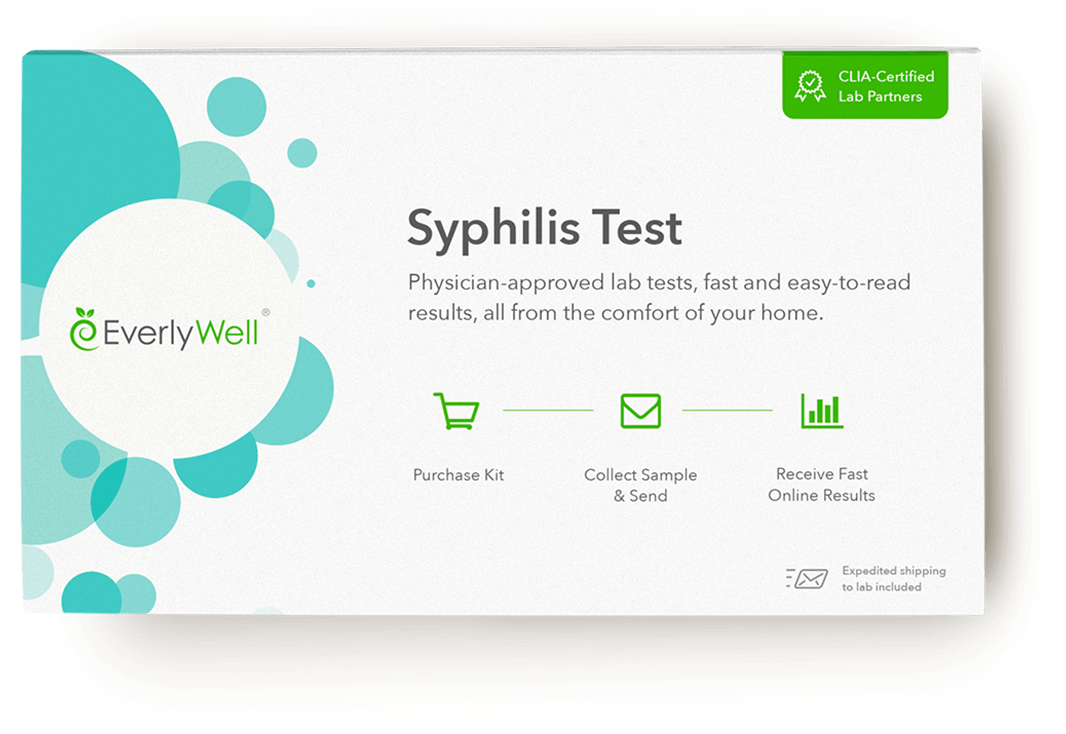 This order counts as your one free test included in your membership. Your order will be processed immediately and shipped to your address on file.

Select Frequency
Learn how Everlywell subscriptions work
Shop our 4th of July Sale⁠—use code JULY4 and get 25% off on orders up to $249 or 30% off on orders $250+.
We accept HSA/FSA payments. Free Shipping Both Ways!
Related Symptoms

Rash (especially on palms of hands)

Syphilis is caused by the bacteria Treponema pallidum. While this used to be a rare STD, it has been on the rise since 2005. Our syphilis test lets you easily check for this sexually transmitted infection from the privacy and convenience of home.

Once you order, the test materials are delivered to your doorstep in discreet packaging.

Enter the unique kit ID included with your kit at Everlywell.com.

Complete a simple finger prick collection and return with prepaid shipping.
How it Works

An independent board-certified physician will review your results.

Once verified, you’ll receive your results on our secure platform within days.
What's Included 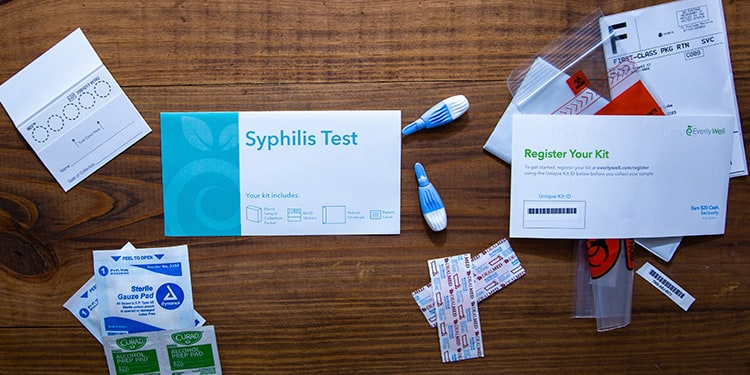 Pre-paid shipping both ways
Gauze and bandages
Detailed directions to guide you
Help along the way if you need it
Single-use Lancets for pricking your finger
Biohazard bag for returning your sample
Finger prick blood card for collecting your blood sample
Alcohol pad for cleaning your finger
Your Results
Easy to Understand
Gain meaningful insights about your health with easy-to-understand test results. Download and share with your healthcare provider, family, or friends. We also provide you with additional resources and helpful tips along the way.
Personalized
View a personalized report of each marker tested as well as detailed information about what your results mean for you.
Actionable
Take action on your health and wellness. Use your report to help guide your next steps. Join our community to hear about others’ experience, or set up a discussion with a healthcare professional to go over your results further. 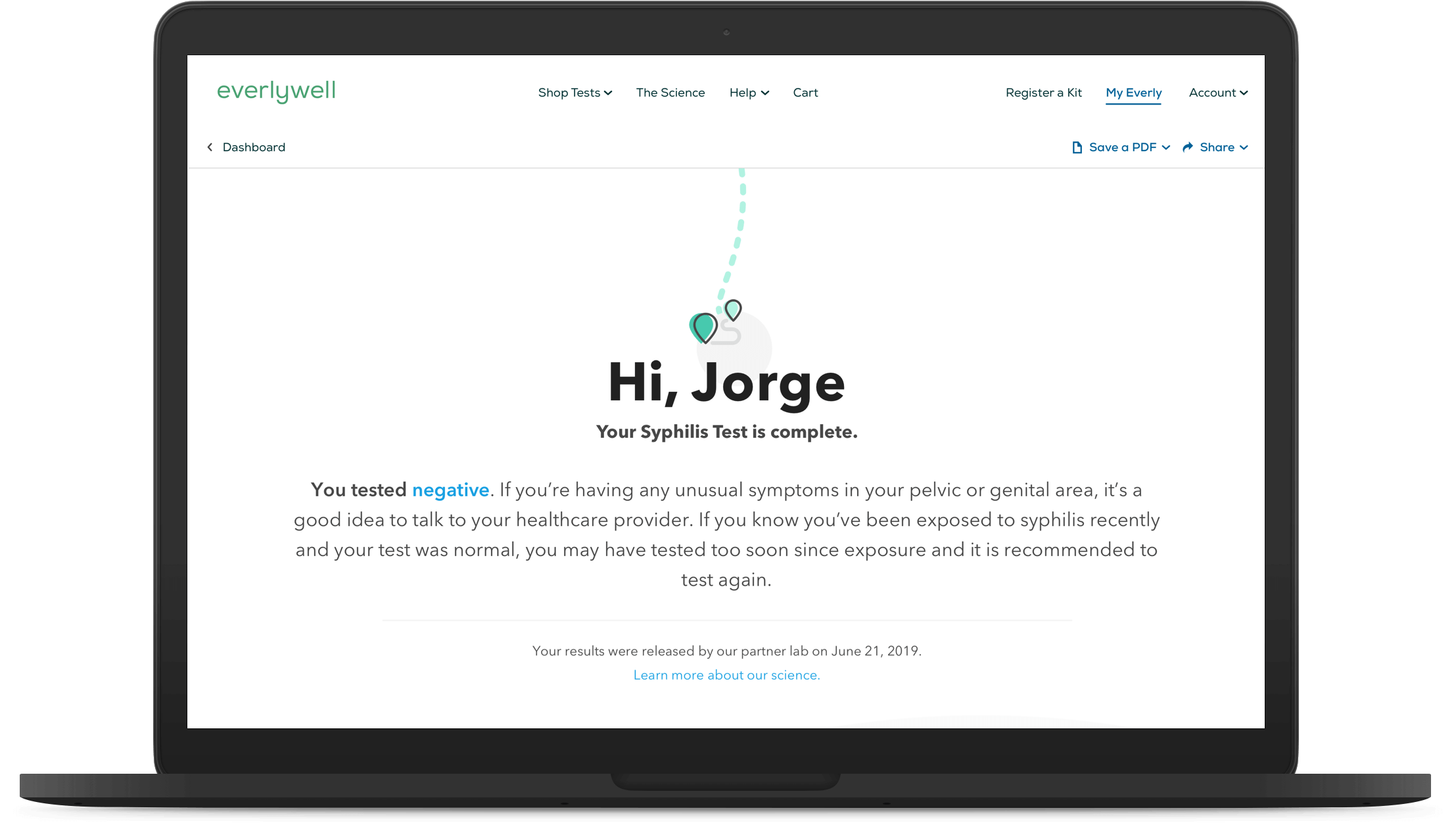 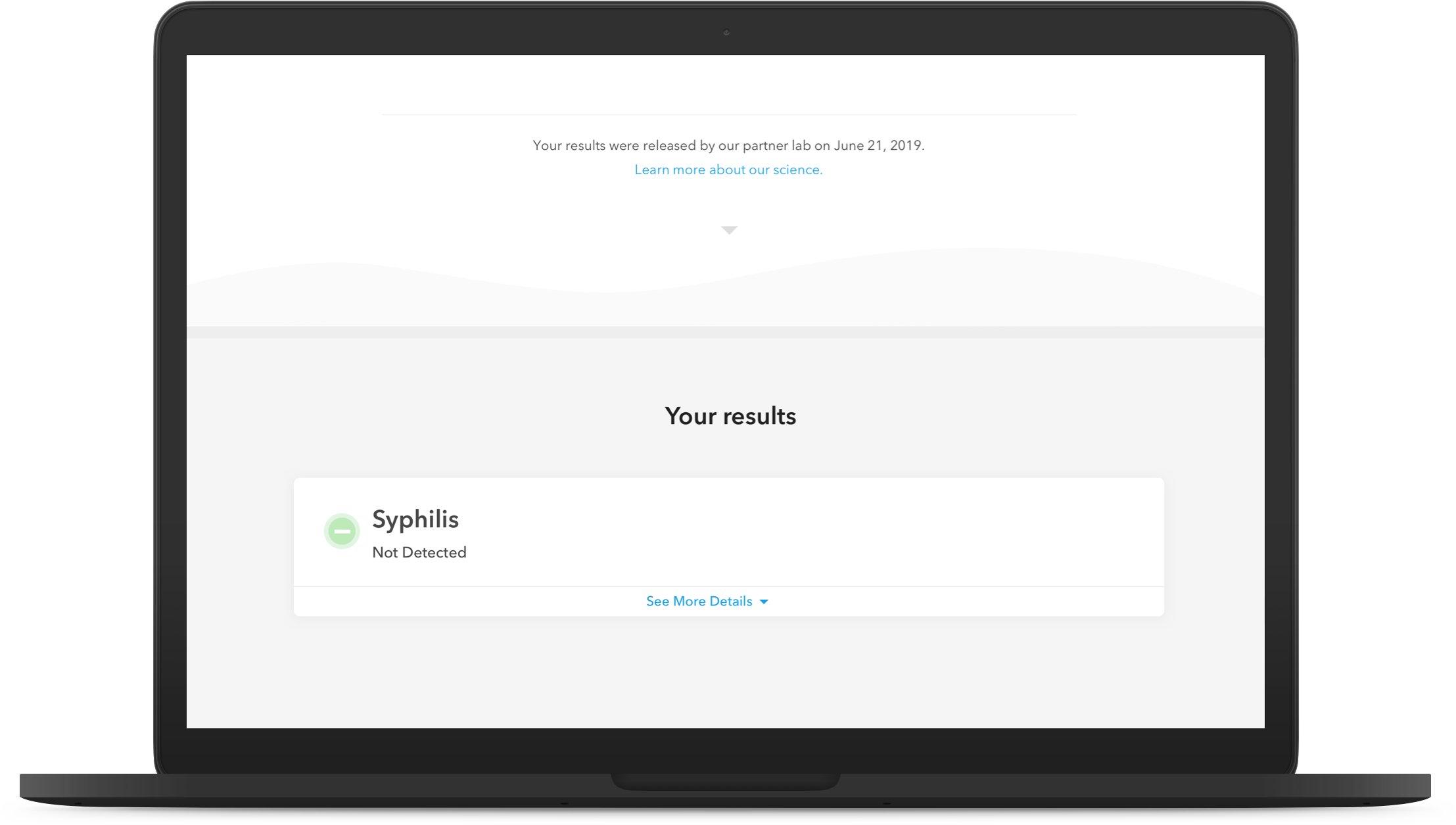 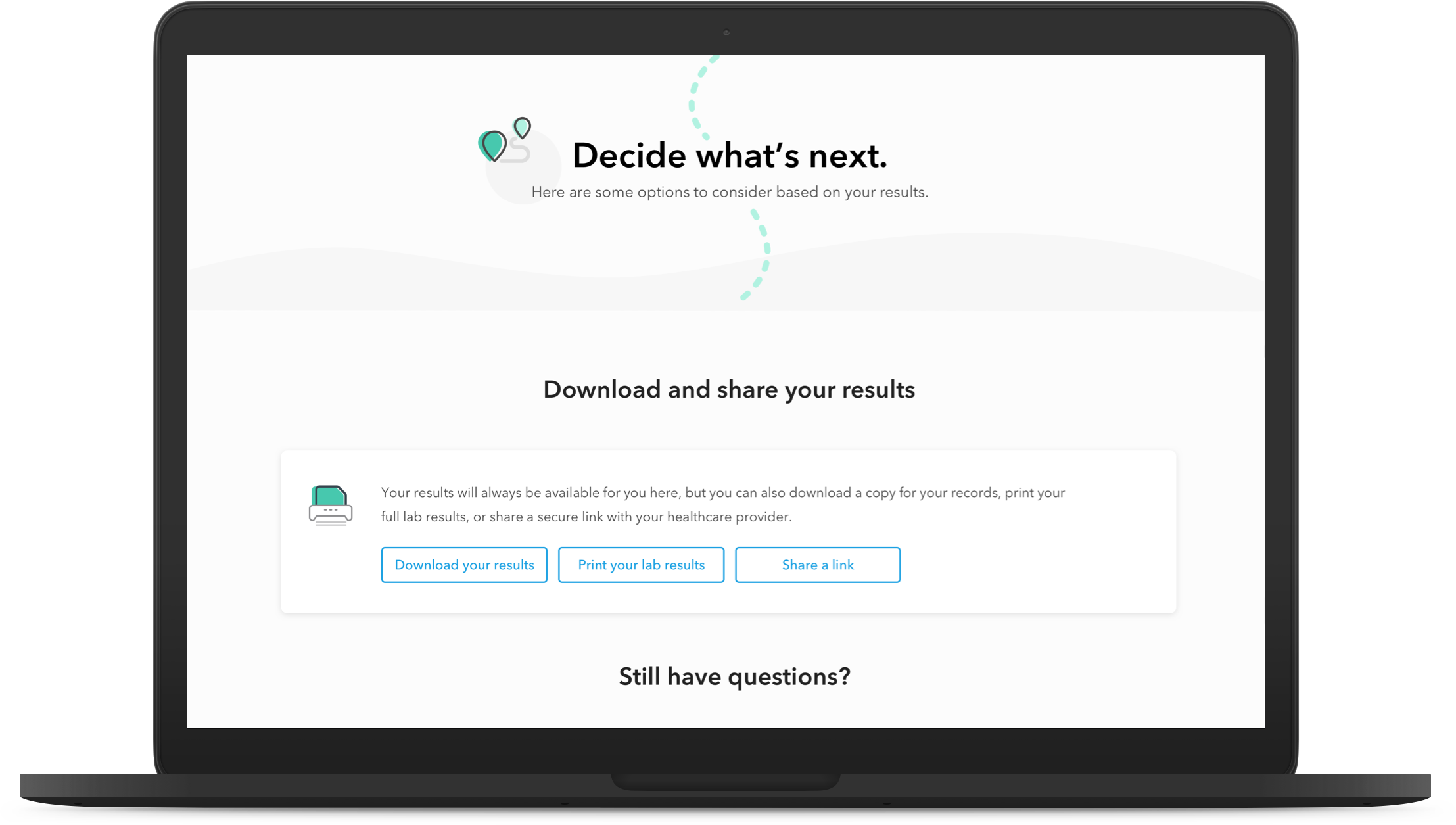 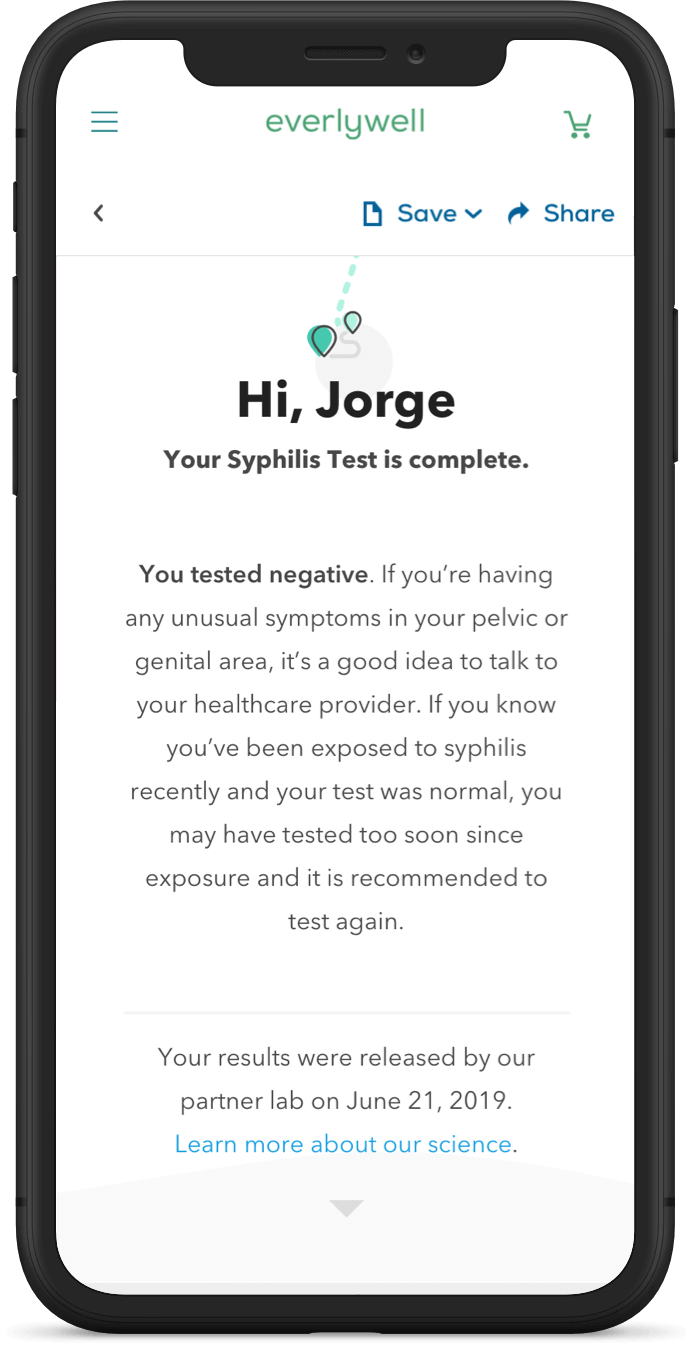 Easy to Understand
Gain meaningful insights about your health with easy-to-understand test results. Download and share with your healthcare provider, family, or friends. We also provide you with additional resources and helpful tips along the way. 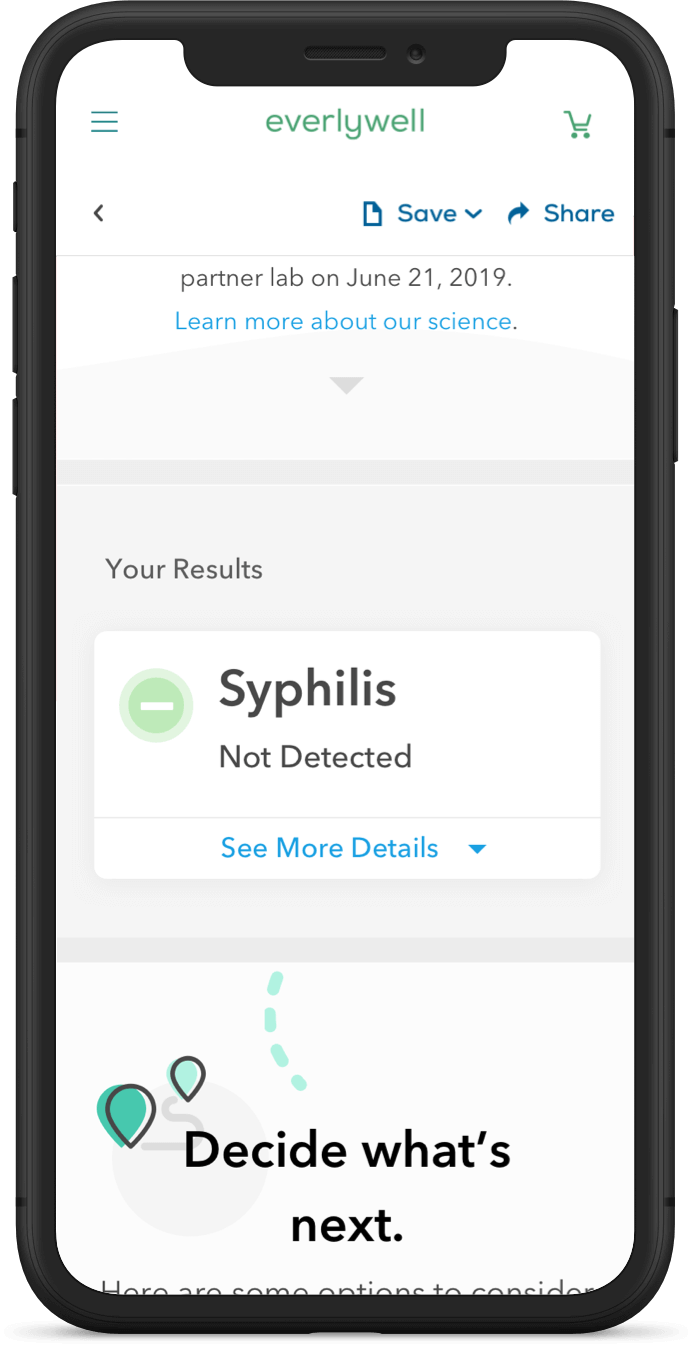 Personalized
View a personalized report of each marker tested as well as detailed information about what your results mean for you. 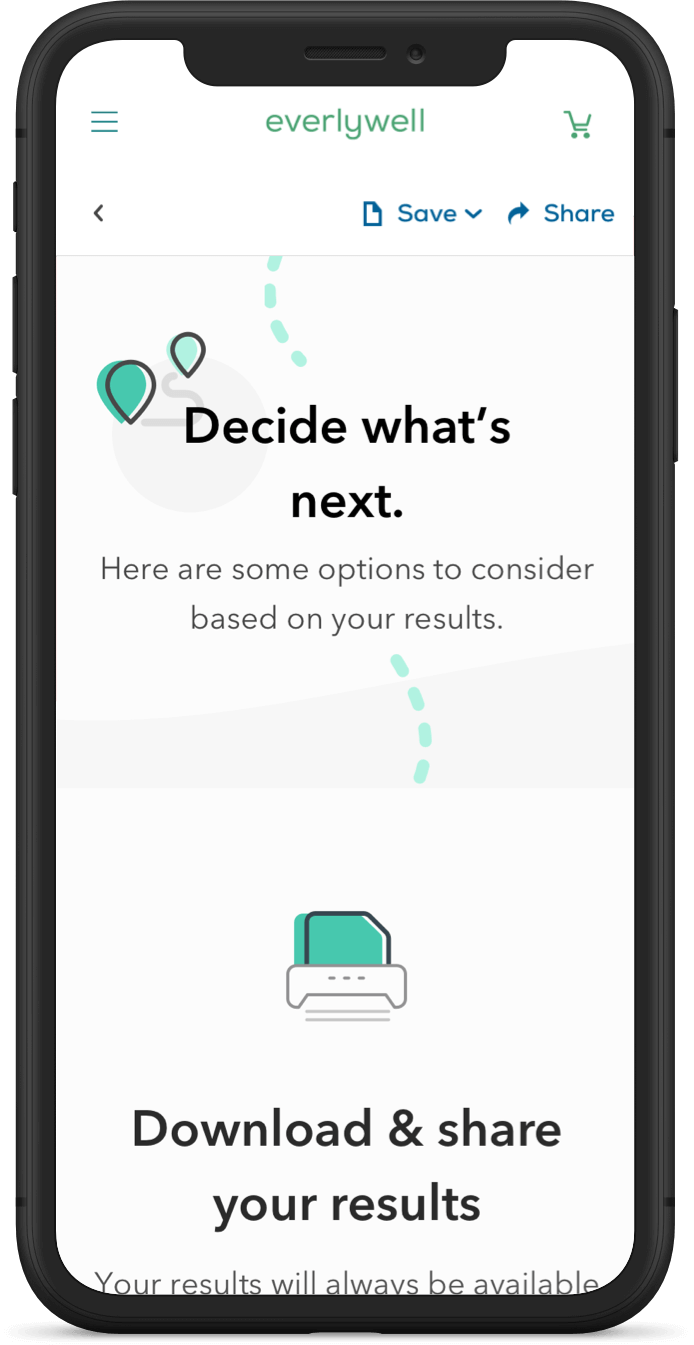 Actionable
Take action on your health and wellness. Use your report to help guide your next steps. Join our community to hear about others’ experience, or set up a discussion with a healthcare professional to go over your results further.
Why Everlywell

Physician Reviewed
Everlywell tests are reviewed and approved by an independent board-certified physician within your state. This ensures that any test ordered is relevant to your health and wellness.

Certified, Top Quality Labs
Each lab we work with is CLIA-certified (Clinical Laboratory Improvement Amendments). This means they have to meet high standards to obtain both state and federal certifications and submit themselves to regular inspections.

State of the Art Collection Methods
We use well-established and effective at-home collection methods that are easy-to-do at home. We only offer tests that meet rigorous standards for reliability and validity for at-home collection.

Syphilis: What It Is, And Who's At Risk

It’s estimated that about 85,000 new cases of syphilis are reported to the Centers for Disease Control and Prevention (CDC) annually, and the total number of infected individuals in the United States has been increasing over the past few years.

Pregnant women infected with syphilis can spread it to their unborn child during pregnancy (resulting in congenital syphilis). Men who have sex with men comprise the largest group of infected individuals, totaling just over 80% of all reported cases to the CDC in 2016. It’s recommended that anyone who has had sexual contact with a person known to be infected with syphilis, men having sex with other men, pregnant women, sexually active people with HIV, and anyone taking PrEP for HIV prevention should get tested for syphilis.

This syphilis test will, within >99% accuracy, tell you whether you have this infectious disease.

As with all Everlywell tests, our at-home Syphilis Test kit is delivered in discreet packaging and taken in the privacy of your own home. Once you return your test sample to our lab and your sample is processed, you’ll be notified via email when your results are ready. You will then be able to access your test result through an easy-to-understand report on our secure online platform.

The Syphilis Test checks whether or not you test positive for syphilis. In the event that your test results are abnormal, an associate from our physician network will contact you directly to discuss your particular case as well as provide information on how to take the next steps to get treatment. We take customer privacy very seriously and will never share your information with a third-party with the exception of the lab we use to test your sample and our physician network. As is the case with all sexually transmitted disease testing - whether through Everlywell or your doctor – we may be required by law to report positive test results to certain state health departments. This is only done to track infection prevalence. In rare cases you may not receive a definitive test result because of early syphilis infection or inadequate sampling and repeat testing is suggested. Don’t take a chance on your sexual health. Know where you stand with our at-home Syphilis Test.

A syphilis infection is associated with certain signs and symptoms based on the phase of the infection:

In some cases, syphilis bacteria can attack the nervous system—resulting in “neurosyphilis.” Neurosyphilis—a condition that can develop at any point in a syphilis infection—can lead to severe brain disorders characterized by dementia, loss of muscle coordination, and more.

Because the signs and symptoms of neurosyphilis are similar to those of other disorders, a diagnosis requires lab testing via a lumbar puncture—or “spinal tap" (so spinal fluid can be analyzed). More specifically, in a lumbar puncture, a needle extracts a sample of cerebrospinal fluid from the spinal cord (the system of nerves and vertebrae that runs down the back and transmits signals between the brain and the rest of the body). The cerebrospinal fluid is then checked for syphilis bacteria to determine if the infection has reached the nervous system.

Treponemal tests check a sample of blood for antibodies that react with certain molecules (antigens) that are unique to the syphilis bacterium. (Antibodies are specific compounds made by your body in response to bacterial infections, viruses, or other microbes. They tell your immune system’s defender cells if something is a threat that needs to be destroyed.)

The Everlywell Syphilis Test—which lets you check for syphilis from the privacy and convenience of home—is a treponemal test.

Non-treponemal tests are some of the oldest antibody tests that check for syphilis, and are widely used by many laboratories since they are needed for diagnosing an infection.

During an active infection, syphilis bacteria produce a very specific compound known as “cardiolipin-lecithin–cholesterol.” In response, your immune system makes antibodies that react with this compound that tell your immune system’s defender cells where the infection is taking place in the body.

Non-treponemal tests measure how much, if any, of these antibodies are in a blood sample. The Rapid Plasma Reagin (RPR) test and Venereal Disease Research Laboratory (VDRL) test are some of the most commonly used.

What’s the difference between a treponemal and nontreponemal test?

Treponemal tests give either a “positive” or “negative” result. Treponemal tests are often used as screening tests, where a positive result indicates that additional testing for syphilis is needed to confirm the diagnosis.