STD Rates by State: Where Chlamydia, Gonorrhea, and Syphilis are Highest and Lowest

Sexually transmitted diseases and infections (STDs/STIs) are quite common, and at an all-time high in the United States. They are typically spread from one person to another through sexual contact and oftentimes individuals with STIs experience mild to no symptoms—which can be a challenge to diagnose and treat.

Untreated STIs pose a serious problem as they can lead to long-term health consequences for yourself or your partner, such as female and male infertility, pelvic inflammatory disease, and cervical cancer (female).

As the number of STI cases continues to rise across the U.S., we decided to take a look at STI rates by state, using the CDC’s STD surveillance report to discover which regions have the highest rates.

Read on or skip to our infographic as we uncover rates of the most common STIs by state, and how both men and women can reduce their risk of STIs if they’re sexually active.

States With the Highest STI Rates 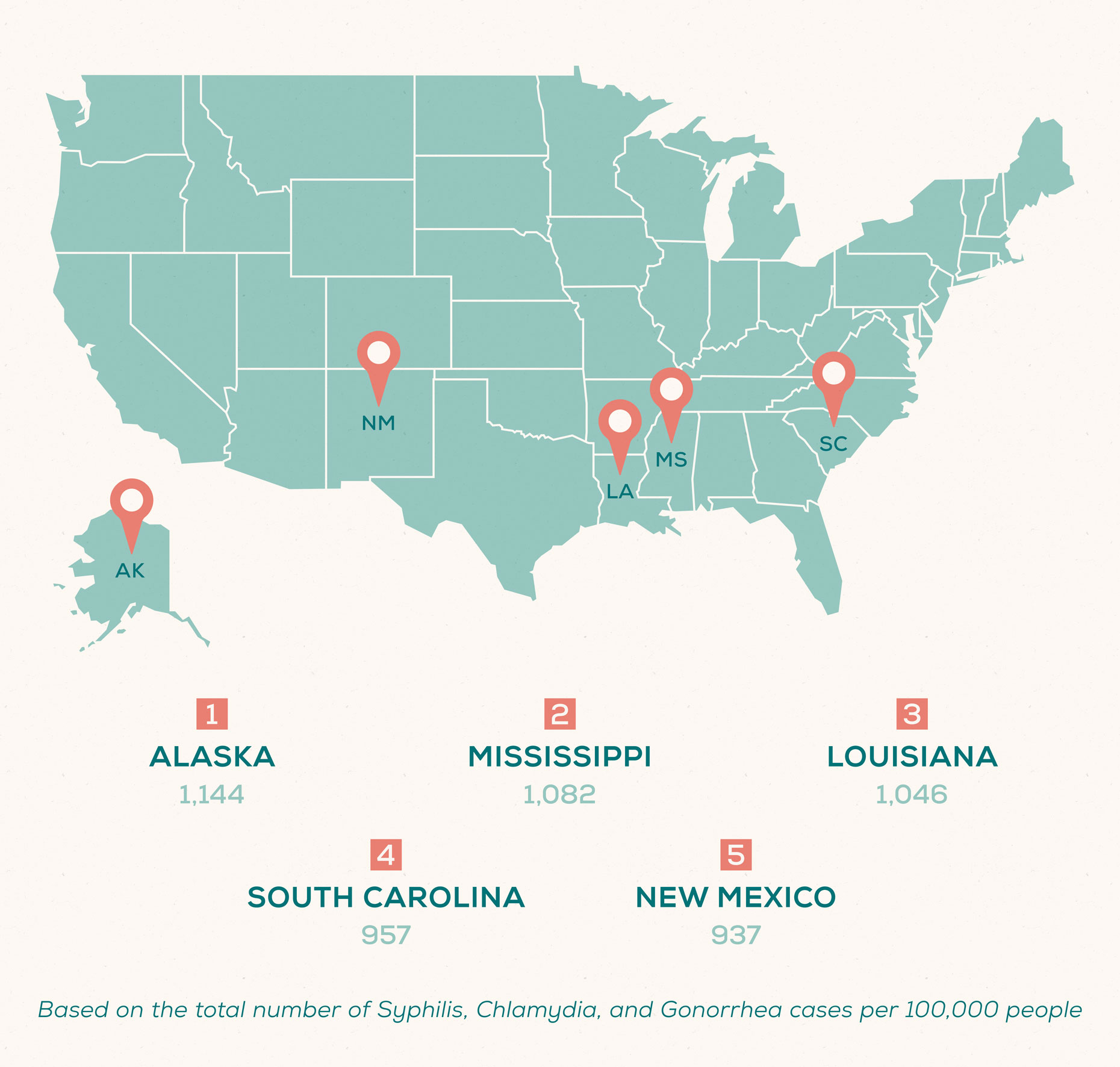 Based on total STI rates reported (for primary and secondary syphilis, chlamydia, and gonorrhea only), the following states have the highest rates of sexually transmitted infections in the United States.

There are more than 20 different types of STDs/STIs. We cover some of the most common ones below.

This is a sexually transmitted bacterial infection that's caused by Chlamydia trachomatis. Reported cases of chlamydia are about twice as high in females than in males and are highest among females 15–24 years of age. Once detected, chlamydia can be cured with proper antibiotic treatment.

Gonorrhea is an STI caused by Neisseria gonorrhoeae bacteria. Reported cases among males and females are equally common and reports of cases are high among individuals who are 15-24 years of age. Once detected, gonorrhea can be cured with proper antibiotic treatment.

Note that you can take an at-home chlamydia and gonorrhea test to check for these bacterial STIs from the convenience and privacy of home.

Syphilis can be cured with proper antibiotic treatment. However, treatment cannot undo damage that the infection has already caused, which is why it is important to detect and treat syphilis in its early stages. It’s possible to check for syphilis with an at-home syphilis test.

Among the STIs listed above, chlamydia is the most common. In 2018, there were 1.8 million cases of chlamydia reported in the United States—more than twice the amount of reported cases of gonorrhea and syphilis combined. 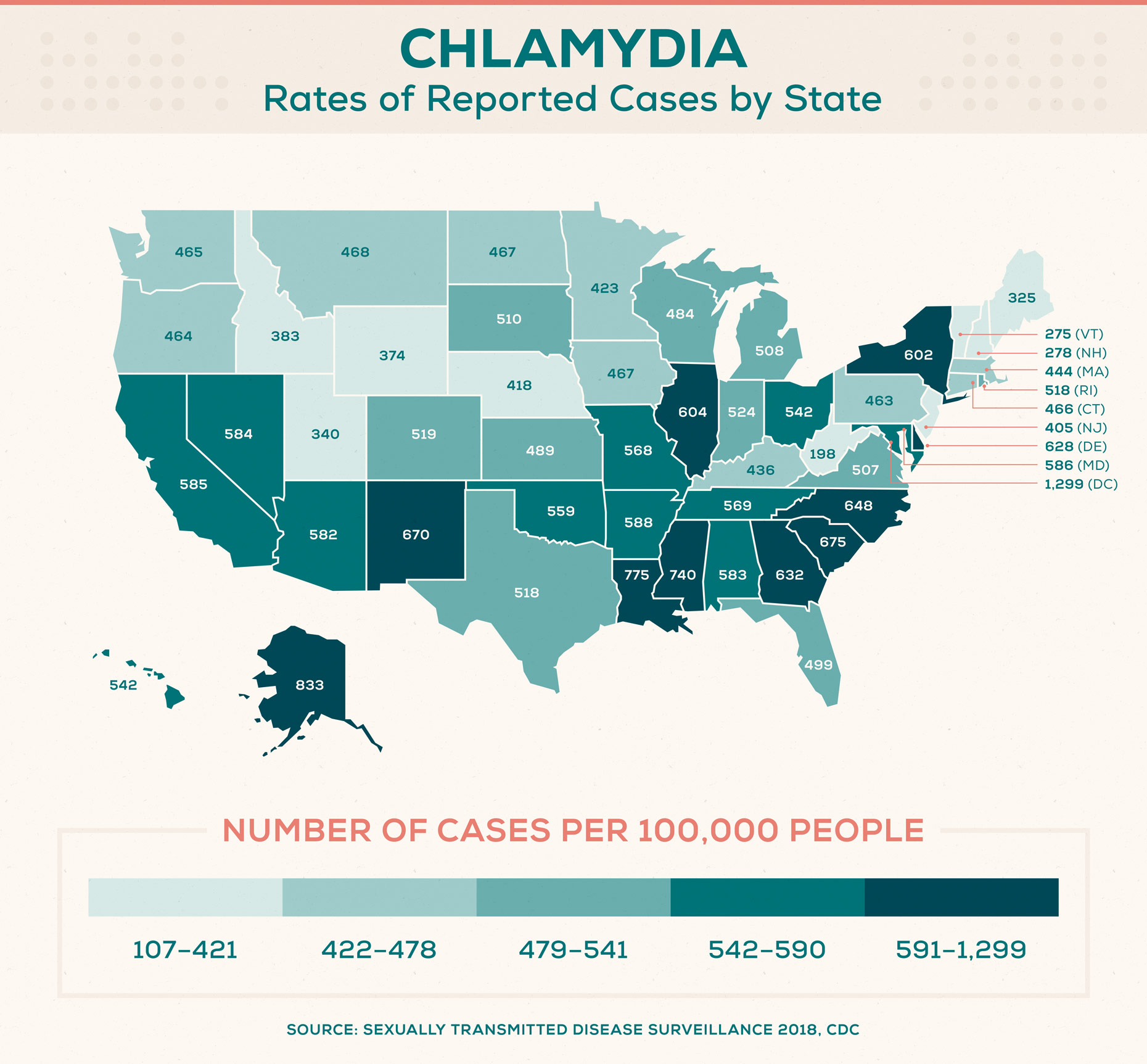 States with the highest rates of reported chlamydia cases (per 100,000 people):

States with the lowest rates of reported chlamydia cases (per 100,000 people):

In 2018, there were 583,405 reported cases of gonorrhea—a 63% increase in reported cases since 2014. Similar to chlamydia, this infection affects both men and women and can cause health complications if left untreated. 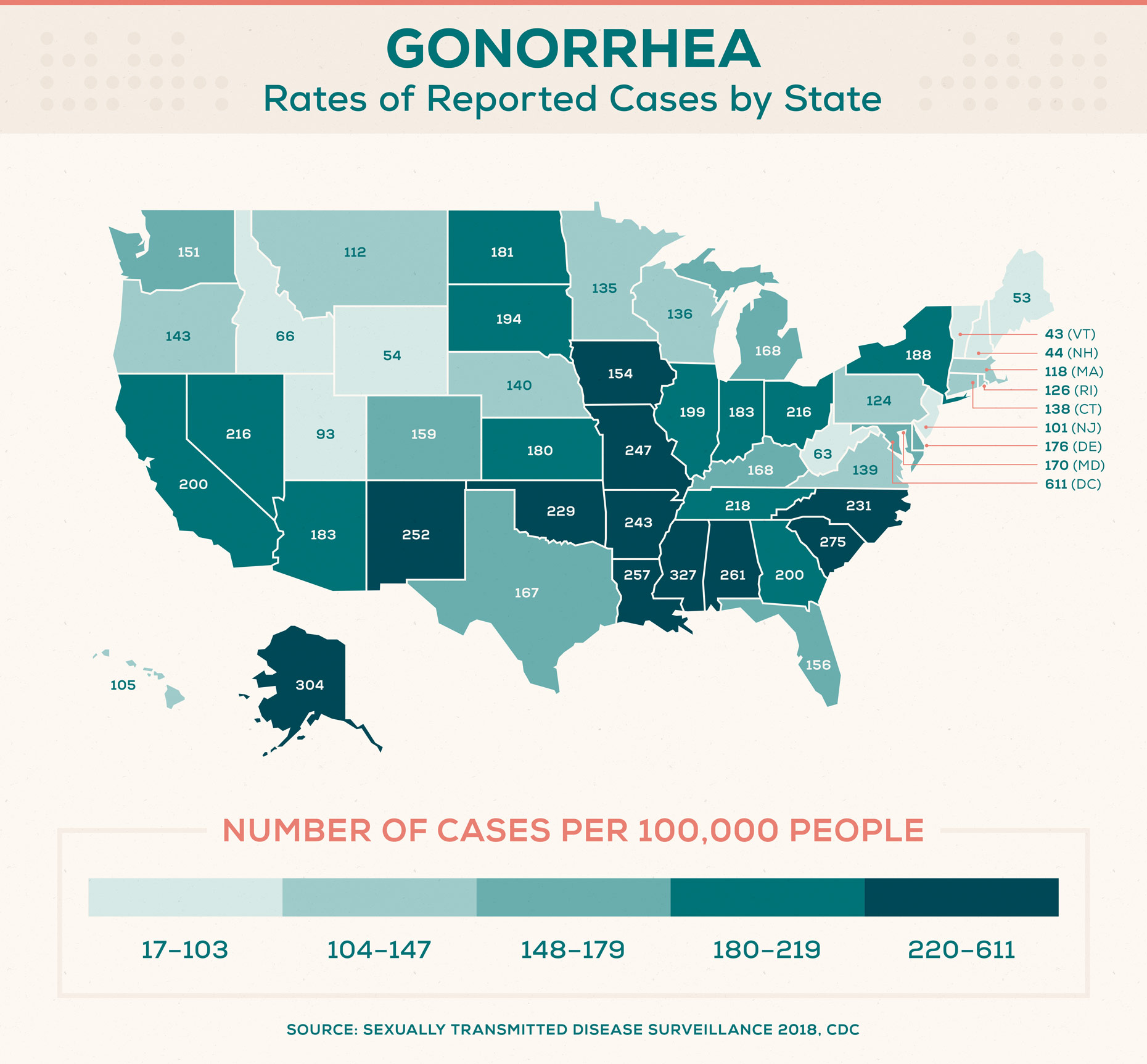 States with the highest rates of reported gonorrhea cases (per 100,000 people):

States with the lowest rates of reported gonorrhea cases (per 100,000 people):

Syphilis cases continue to be on the rise. In 2018, there were over 115,000 syphilis cases in the United States, which includes 35,000 newly reported cases of primary and secondary syphilis—the two earliest, most infectious stages. This is the highest reported number in nearly 30 years. 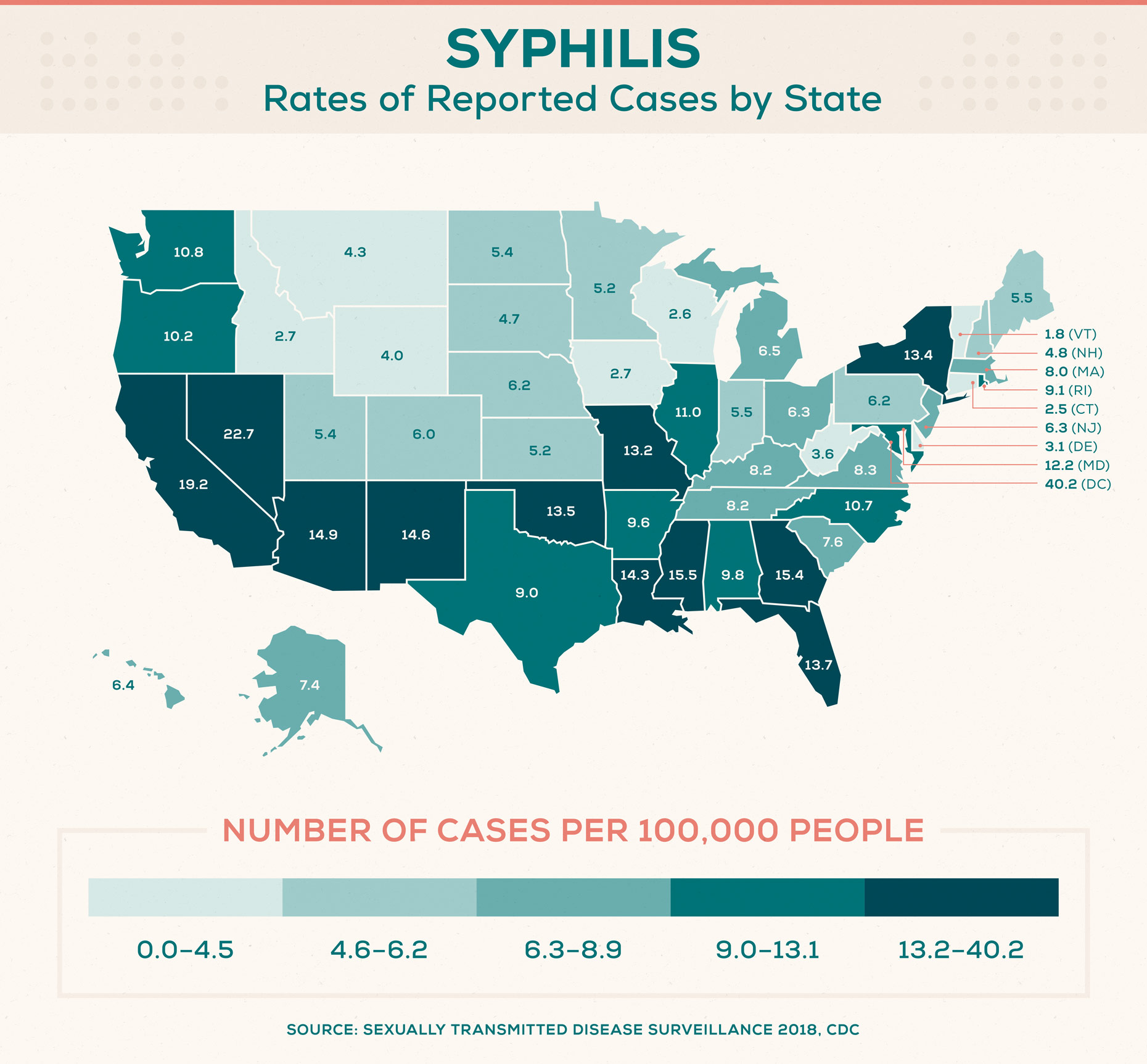 States with the highest rates of primary and secondary syphilis cases (per 100,000 people):

States with the lowest rates of reported primary and secondary syphilis rates (per 100,000 people):

Ways to Lower Your Risk of STDs/STIs

When planning to be sexually active with a new partner, follow the tips below to help limit your risk of contracting an STD/STI.

Communicate With Your Partner

To protect yourself and your partner from STDs/STIs, it’s important to communicate and talk about safe sex before being intimate for the first time. Here are several questions you can ask to get the conversation started:

It’s best for both you and your sexual partner to get tested for STIs before you are intimate. Remember, many people who have an STI will not experience any symptoms, and may not even know that they have one. That’s why getting tested and potentially treating your STI is an effective way to protect yourself and others.

If you’re planning to be sexually active with someone for the first time or you’re experiencing symptoms characteristic of an STI, consider taking an at-home STD test for men or women for convenient and discreet results.

Currently, there are vaccines available to protect uninfected individuals against HPV (human papillomavirus) and hepatitis B. Discussing your vaccination options with your primary care provider is the best way to help you determine whether you may benefit from vaccination.

STIs/STDs are among the most common infections across the United States, and anyone who’s sexually active can contract or spread them. If you’re planning to be sexually active with a new partner, get tested and use protection to ensure you keep yourself and others safe from harmful or even life-threatening infections.