May is Asian American and Pacific Islander Heritage Month, and we’re taking a closer look at the health and wellness of Asian communities in the U.S.

Studies suggest that Asian Americans rank among some of the healthiest adults in the U.S. However it is important to recognize that such a broad generalization does not accurately represent an entire community of people or speak to the health disparities that may exist within certain subsets of the population. In fact, when the data for many of the studies that survey Asian Americans is disaggregated, we see that some subgroups within the Asian community experience more health issues than the overarching results may present.

What is the state of Asian American health and wellness?

Before we evaluate the state of Asian American health and wellness, let’s first understand how public health experts define the term, “Asian American.” According to the U.S. Department of Health and Human Services, “this racial group is defined as people having origins in any of the original peoples of the East Asia, Southeast Asia, or the Indian subcontinent." This is important to consider as we dive into the data on the health and wellness of specific subgroups, and how health disparities affect Asian communities differently.

Asian American populations are ranked by the CDC as some of the healthiest groups in the U.S. However, in the same 2016 report on the “Health of Non-Hispanic Asian Adults, 2010-2014,” the CDC’s data revealed this is in fact not true when the analysis is conducted by specific Asian subgroups.

This chart provides an overview of this data: 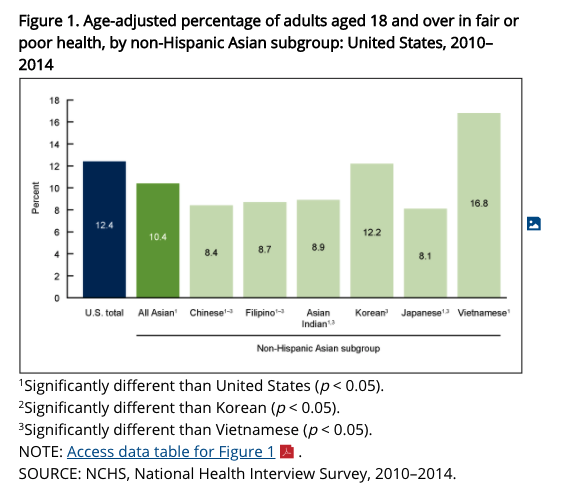 So, while the Asian American population as a whole ranks lower in “fair or poor health” compared to the general population, breaking down health outcomes by specific subgroups within the community is important to understanding where increased education and prevention efforts are needed.

Health disparities are defined by the Centers for Disease Control and Prevention (CDC) as the “preventable differences in the burden of disease, injury, violence, or opportunities to reach your best health that are experienced by socially disadvantaged populations.” Research has shown that marginalized groups are far more likely to be affected by patterns of discrimination and substandard care, and health disparities are directly related to the historical and current unequal distribution of social, political, economic, and environmental resources.

We see this reflected in other health disparities related to Tuberculosis (TB). According to the CDC, 87% of all reported TB cases in 2018 occurred in racial and ethnic minorities. The disease was reported in 3,190 Asians in the United States, accounting for 35% of all people reported with TB nationally. The rate of TB in Asians was 17 cases per 100,000, which is 31 times higher than the rate of TB in non-Hispanic whites (0.5 cases per 100,000 population).

When considering the health and wellness of Asian populations in the U.S., infrequent medical visits, language and cultural barriers, and lack of health insurance, are among some of the most prominent barriers to health care. As the Kaiser Family Foundation puts it, “some ethnic subgroups have recent immigration histories and stronger ties to their Asian culture, while others have substantial numbers of at least third-generation Americans. This gradient of acculturation is significant because both culture and language affect health in many ways, including individual health practices and a person’s ability to navigate in the American health system.”

According to the Office of Minority Health, Asian Americans that are most at risk for cancer, heart disease, stroke, unintentional injuries (accidents), and diabetes.

Asian Americans also have a high prevalence of other conditions and risk factors, including HIV/AIDS, with more than 1 in 5 Asians living with HIV do not know they have it.

NBC News reported that one study published in the American Journal of Public Health, which looked at health outcomes from survey data for 13,297 Asian Americans in California, found, similarly to the CDC report and other studies, that as an aggregate group, Asians in America appeared healthier than non-Hispanic whites. But when the data is disaggregated, a number of disparities among subgroups of Asian Americans are revealed.

Ultimately, aggregating subgroup data into one single Asian category may mask differences in health outcomes or health issues that should be addressed within these respective subgroups. One of the authors of the study believes disaggregating the data “ensures that efforts to protect Asian Americans' right to health are properly informed and targeted.”

Although Asian Americans are often grouped together as one racial and ethnic population, they are an extremely diverse cultural group. When it comes to health disparities, including those perpetuated by socioeconomic and environmental factors, identifying and differentiating between subgroups within the U.S. is important to understanding where more awareness and education is needed.