Myths about sexual health are surprisingly common. While over the decades there has been a shift towards including more sexual health education in school curriculums, it’s not always enough to debunk the common myths surrounding sexual health many people still have. In fact, as of 2017, only about half of adolescents (57% of females and 43% of males) admitted they received formal instruction about contraception before they had sex for the first time.

Areas of confusion surrounding sexual health may fall under the following topics: how to contract or prevent STIs (sexually transmitted infections), how to maintain sexual hygiene, what causes pregnancy, and birth control options that are available to prevent an unwanted pregnancy.

When it comes to sexual hygiene—or maintaining cleanliness before, during, and after sexual activity—there are a lot of common myths on what the best practices are. Practicing proper sexual hygiene habits is essential for reducing the risk of infections and maintaining your overall health.

Myth: Douching is necessary to keep the vagina clean

In the United States, almost one in five women who are age 15 to 44 use a douche as a method to clean the vagina. However, most doctors recommend that you do not douche, as douching can change the necessary balance of vaginal flora (bacteria that live in the vagina) and natural acidity in a healthy vagina.

A healthy vagina actually maintains both good and harmful bacteria. This balance of bacteria creates an acidic environment within the vagina that helps protect it from infections or irritations. That said, the best way to clean the vagina is to rinse it in the shower with warm water and mild or unscented soap.

Myth: Urinating after intercourse will not help prevent infections

This is false. Actually, it’s recommended to empty your bladder after having sexual intercourse. The idea behind this is that bacteria can get into your urethra as you have sex, increasing your risk of infections like UTIs (urinary tract infections). Going to the bathroom right after sex helps flush bacteria out before they travel to your bladder. 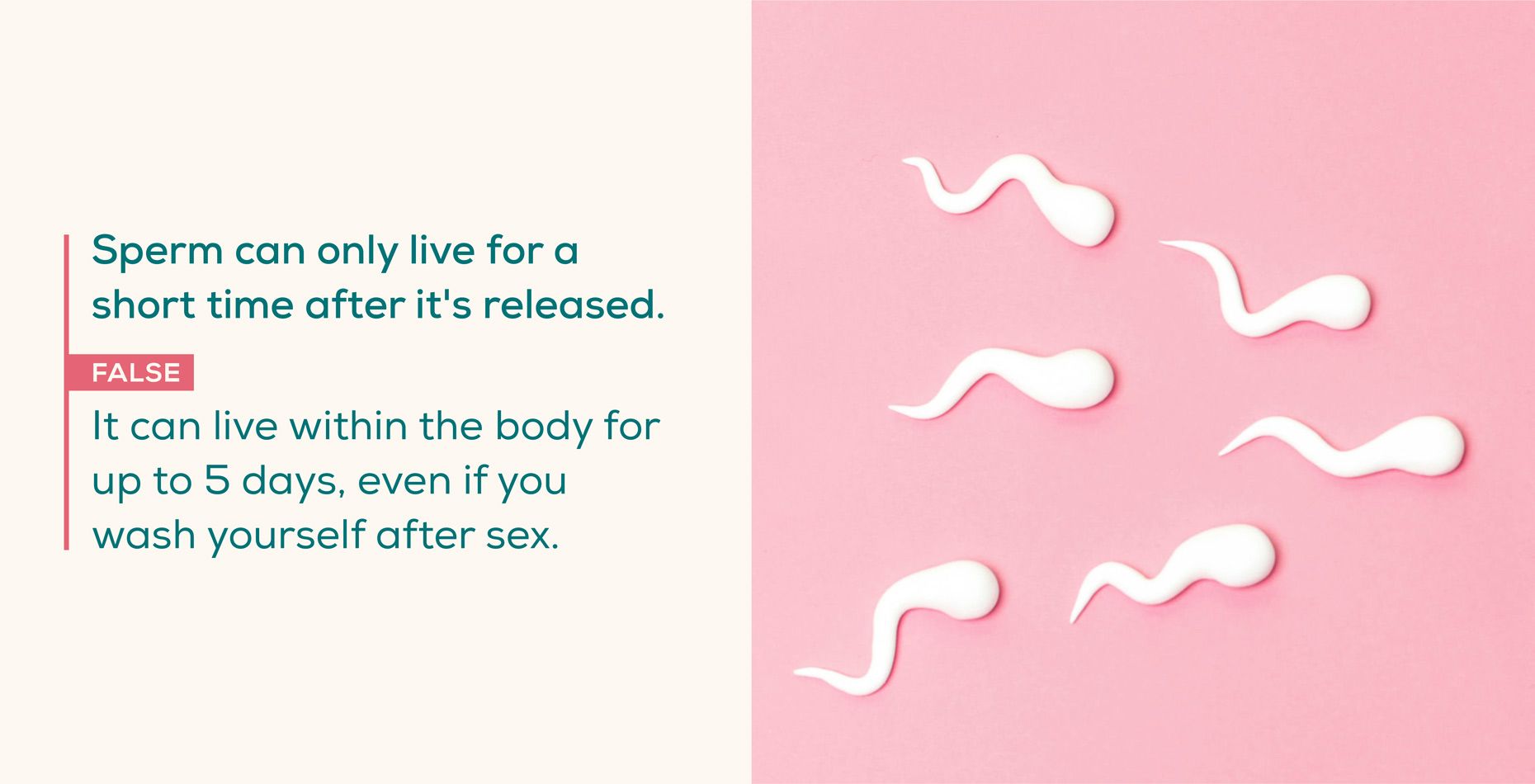 Myth: Infertility is much more common among women

Infertility doesn’t just affect women. In the United States, 10–15 percent of couples are infertile, and both men and women can equally contribute to infertility.

Causes of infertility in males may include:

Causes of infertility in females may include:

Myth: Men reach their sexual peak at a younger age than women

Many people believe that men and women have different “sexual peaks” or ages where they can perform at their “sexual best,” as men’s testosterone levels peak around age 19 and women’s estrogen levels peak in their mid-to-late 20s. However, sexual desire, performance, and frequency constantly fluctuate and are related to many factors beyond just your age.

Myth: Sperm can only live for a short time after it’s released

After ejaculation, a male’s sperm can actually live in the female reproductive tract for up to five days, even if you thoroughly wash yourself after sex. For this reason, if a man has sex with a woman, even a few days before she ovulates or before she’s in her “fertility window,” there's still a chance a pregnancy could occur.

Familiarizing yourself with the facts and staying informed is a great way to protect yourself and reduce your risk of contracting a sexually transmitted infection. 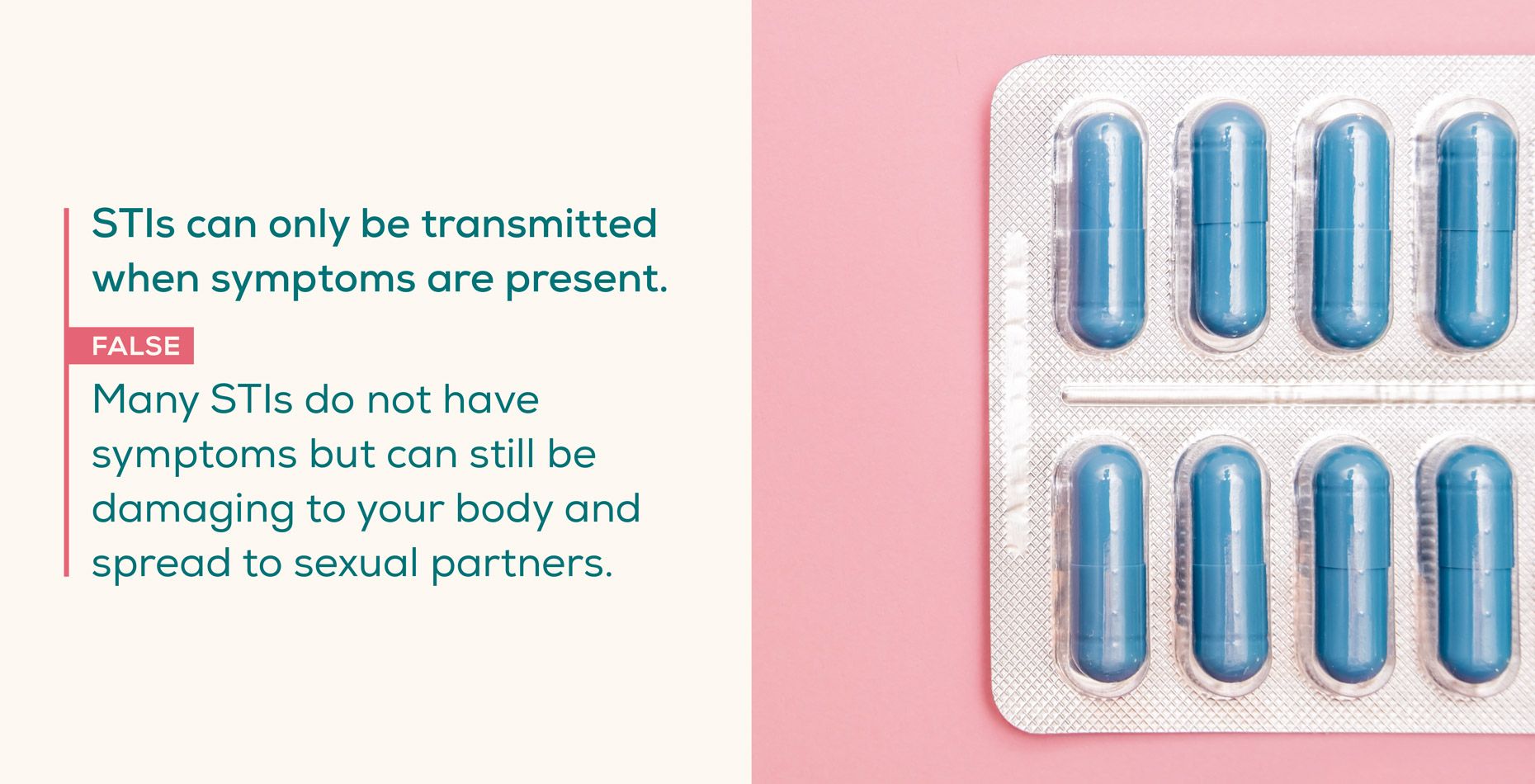 Myth: STIs can only be transmitted when symptoms are present

This is false. In many cases, an STI may not cause symptoms, but can still exist in your body and be spread to sexual partners. Even without symptoms, STIs can harm one’s health. That’s one reason why it’s important to get regularly tested for STIs as there may not be any obvious warning signs of an infection.

Contrary to popular belief, HPV is common among both men and women, and about 80% of people will get an HPV infection at some point in their lives. In most cases, HPV goes away on its own; if it doesn’t, however, it can be damaging to both men and women. Serious cases of HPV can cause cancer if left untreated.

Most people with HPV don’t know that they’re infected and never develop any symptoms. Cancer can even take years to develop after a person gets HPV. This is why the CDC recommends that individuals get the HPV vaccination at ages 11–12 to protect against these cancers. For women, it’s a good idea to be regularly tested for HPV, which you can do with an HPV test for women.

Myth: You only need to worry about STIs if you have multiple partners

As long as you are sexually active you should remember that contracting an STI is a possibility, even if you only have one sexual partner. It’s a good idea to make sure you and your partner(s) are tested for STIs before having sexual intercourse together for the first time. It’s also recommended that you regularly test for STIs if you are sexually active.

Myth: You can get an STI from sitting on a toilet seat

STIs are transmitted through sexual intercourse, close intimate contact, or the exchange of bodily fluids. STIs can only live on surfaces for a short amount of time so it’s very unlikely that someone could receive an infection from sitting on a toilet seat—unless they had an open sore or cut touching the seat.

Even then, the chances of contracting an infection is slim to none, as an STI would most likely die on the surface of the toilet seat before you make contact with it.

Myth: You can’t get HIV from getting a tattoo

Though often less common than other routes of transmission, it is possible to contract HIV from getting a tattoo or body piercing if the instrument (in this case the needle) is not sterile and has someone else’s blood on it or the ink has been shared.

If the instruments used for tattooing or piercing are not sterile or properly disinfected between clients, it’s possible that you could be at risk of contracting HIV or other blood-borne infections like hepatitis B. Some states require that all tattoo artists undergo OSHA Blood Borne Pathogen training to reduce the risk of exposure.

If you are getting a tattoo or piercing, consider asking your tattoo artist if they have OSHA Blood Borne Pathogen training and what kind of procedures they follow to prevent the spread of HIV and other blood-borne infections. You can also ask for proof that the artist performing the procedure is licensed and that the license is up to date.

There are many myths surrounding conception and pregnancy, so below we’ve set the record straight on a few common misconceptions. 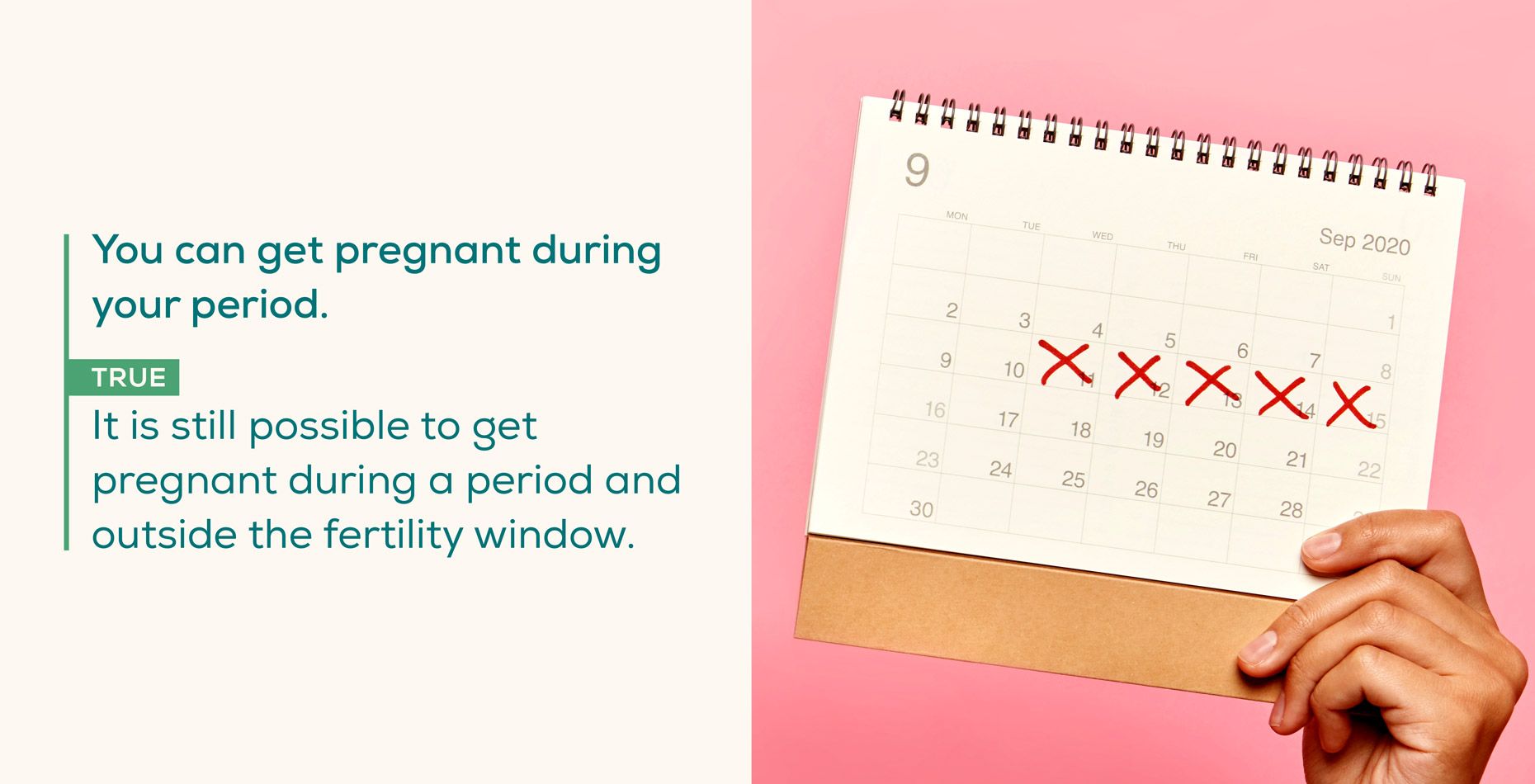 Myth: You can’t get pregnant on your period

While conception is most likely when intercourse occurs a few days before or during ovulation, it is still possible to get pregnant during your period. Sperm can live in the female body for up to five days after sexual intercrouse under the right conditions, so in some cases sperm can fertilize an egg a few days after it has been released in ovulation.

This is relatively uncommon, but it’s more likely to happen in women with shorter period cycles. If you have questions about your fertility, you can always take a simple fertility test to check key hormones or consult your physician.

Myth: The withdrawal method is effective in preventing pregnancy

Yes, you can get pregnant from the withdrawal or “pull out” method, so it’s preferred to always use protection (like a condom) during intercourse if pregnancy is not desired. One reason why? A male’s pre-ejaculatory fluid can contribute to a pregnancy as this fluid contains sperm cells—making conception possible even if the withdrawal method is used.

Safe sex involves any sexual activity that uses methods to reduce the risk of transmitting or acquiring sexually transmitted infections, and it’s true that protection is the best way to practice this. While there are several forms of effective protection, there can still be confusion on the best practices for avoiding STIs. 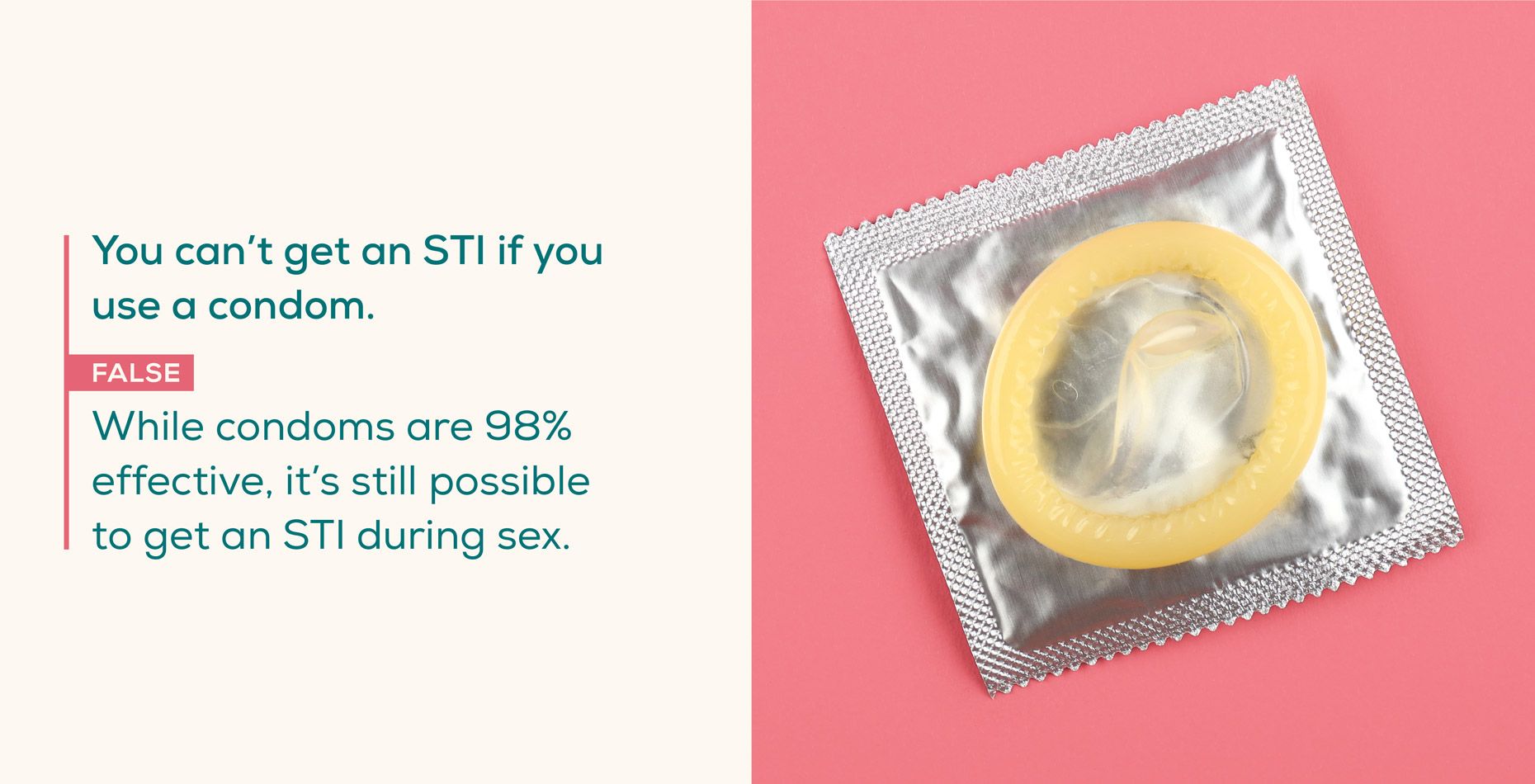 It’s recommended to never use two condoms at once. Using two condoms can actually offer less protection than using just one. Incorrect use of condoms, such as stacking one on top of another can cause friction, weakening the material and increasing the chance of the condom breaking during intercourse.

Myth: If you get the HPV shot you're completely safe from cervical cancer

With HPV being the most common sexually transmitted infection with 14 million new cases each year in the United States, many healthcare providers recommend sexually active individuals to be vaccinated and regularly test for HPV.

Myth: Condoms are only for men

Condoms are made for women as well as men and are just as effective and safe as the traditional male condom. The female condom can be inserted hours before intercourse and, if used correctly, it can even be unnoticeable.

While condoms may look different for men and women, they work the same way: providing a protective barrier to block semen from entering the vagina. Both types of condoms can be used to lower the risk of STIs during sexual intercourse.

Myth: You can’t get an STI if you use a condom

While condoms are 98% effective in preventing STIs, it’s still possible for sexually active individuals to get an STI any time they have sex, even if a condom is used. That’s why it’s a good idea to regularly test for STIs—even if you make sure to always use condoms during sex.

Understanding your body, your partner’s body, and fact vs. fiction when it comes to sexual health is vital to making informed decisions for your health. We understand that sexual health can sometimes be an uncomfortable topic to discuss, but if you have any questions at all, we encourage you to consult with your healthcare provider. With that said, if you prefer more privacy when it comes to your sexual health and testing, consider taking an at-home STD test for women or at-home STD test for men.