Lyme Disease Awareness Month: what it looks like today and where research is headed

Armin Alaedini, PhD, received his undergraduate degree from The Ohio State University, his PhD from the University of Cincinnati, and completed his postdoctoral research at Cornell University. He has directed research and led teams of investigators as a professor and principal investigator at Cornell University and Columbia University and is currently on the faculty of Columbia University Medical Center. He has also previously worked in industry as Head of the Department of Gastrointestinal Health at Nestlé Research in Switzerland. His research in the past 20 years has focused on the role of host-microbe interaction, gut ecosystem, and B cell response in immune-mediated disorders, including in the context of Lyme disease. His work has led to over 70 publications and 50 invited lectures, and his expert commentaries have appeared in major media outlets.

National Lyme Disease Awareness Month is held every May as a chance to amplify the voices of Lyme educators and those affected by Lyme disease to spread awareness about Lyme and other tick-borne diseases. To help in those efforts, we’ve spoken with Armin Alaedini, PhD, an internationally recognized expert in the area of Lyme disease research, to break down the basics of the most common vector-borne infectious disease in the US.

Below, learn more about what Dr. Alaedini had to say about associated symptoms, prevention, treatment, and where current Lyme research is headed:

What is Lyme disease?

Lyme disease is the most common vector-borne infectious disease in the United States and Europe. It is usually caused by the bacterium Borrelia burgdorferi, and more rarely, Borrelia mayonii in the U.S., while Borrelia afzelii, Borrelia garinii, and Borrelia burgdorferi are the leading causes in Europe and Asia. Transmission occurs through the bite of infected ticks.

Can you explain the symptoms of Lyme? What is the prevalence and timing of the rash and other symptoms to consider?

Lyme disease is multisystemic and is usually described as occurring in three stages: early localized, early disseminated, and late disease. Early localized Lyme disease begins at the site of tick bite and is typically associated with a characteristic skin lesion, known as erythema migrans (EM), which appears in about 3 to 30 days after the tick bite. The EM rash is estimated to occur in about two thirds of patients. The earliest signs of Lyme disease can also include fatigue, fever, chills, joint and muscle pain, and headache, which may occur in the absence of the EM rash. Early disseminated disease occurs days to weeks after the tick bite when the bacteria spread through circulation in the body. It can be associated with multiple skin erythema migrans lesions, as well as other manifestations that may affect the heart (Lyme carditis) and nervous system (neurologic Lyme). If left untreated for months to years, the infection can progress to late disease, presenting as arthritis with severe joint pain and swelling, or further severe neurologic complications. 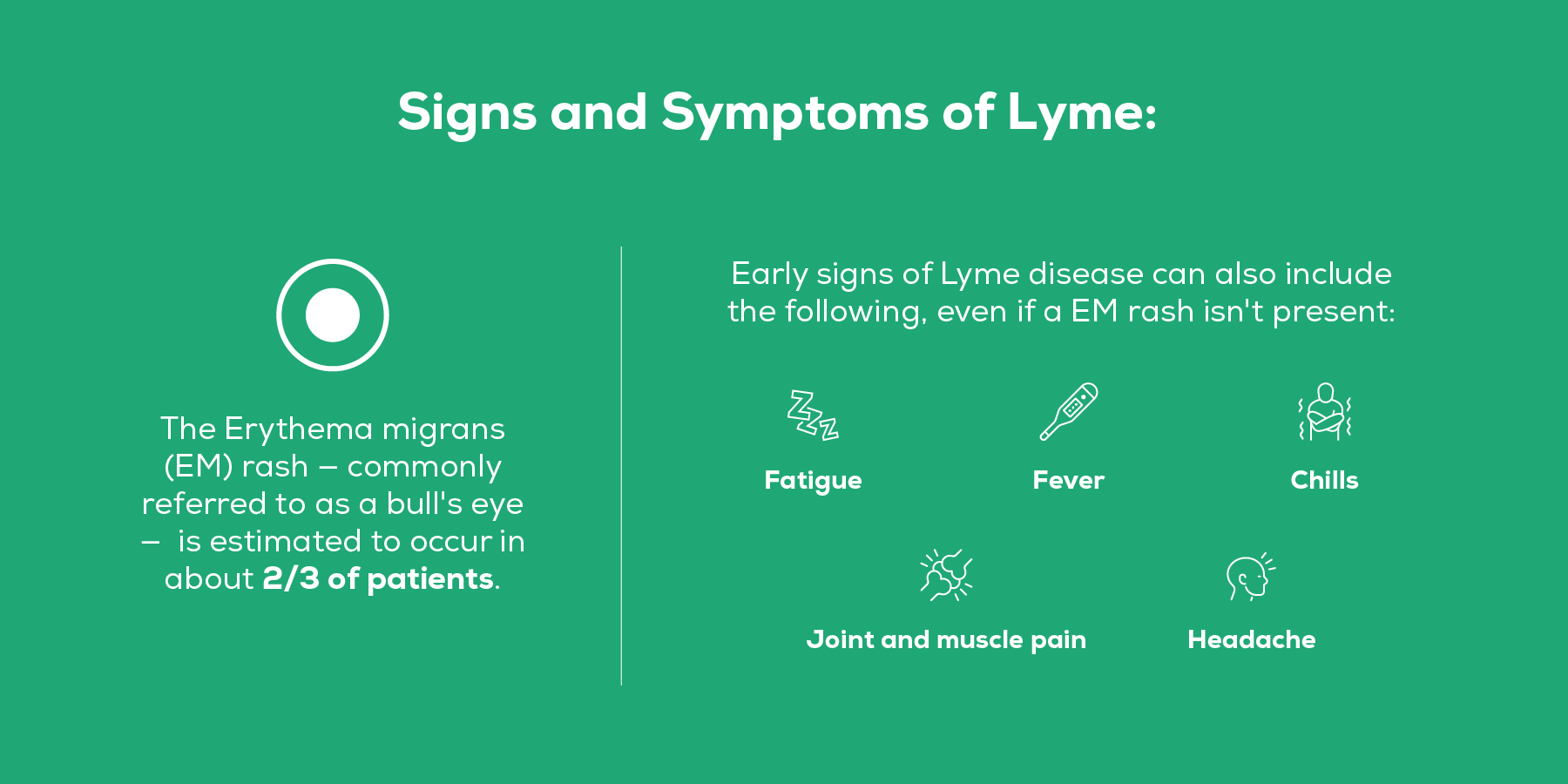 How does testing play a pivotal role in Lyme disease diagnosis, and what types of tests are performed?

Laboratory testing is an important tool to aid the diagnosis of Lyme disease and can be especially pivotal when the EM rash is no longer present. Most of the current tests for Lyme disease work by detecting antibodies produced by the body’s immune system in response to the infectious agent, the Borrelia burgdorferi bacteria. The Centers for Disease Control and Prevention (CDC) currently recommends a two-step testing process for Lyme disease. This widely accepted two-step testing algorithm requires that the second step be done only if the first step is positive or equivocal. If the outcome of the second step test is positive, the overall result of the Lyme disease serologic testing is then considered positive. Historically, these tests have included a sensitive enzyme immunoassay (EIA) as the first step, and a Western blot assay as the second step. However, since 2019, newly cleared serologic EIA assays by the Food & Drug Administration (FDA) can serve as the second step in place of the Western blot for the diagnosis of Lyme disease.

What are the treatment options?

Lyme disease is treated with antibiotics. Timely diagnosis and proper treatment are essential for prevention of the later stages of Lyme disease. Current widely accepted treatment guidelines recommend specific antibiotic regimens based on the stage or manifestation of the infection. Specific oral antibiotics are recommended for the early stage of Lyme disease. Treatment for neurologic Lyme disease, Lyme carditis, and Lyme arthritis, can include oral or intravenous antibiotics, depending on disease severity and other factors.

Are there certain risk factors and preventive measures people can take, if so what are they? 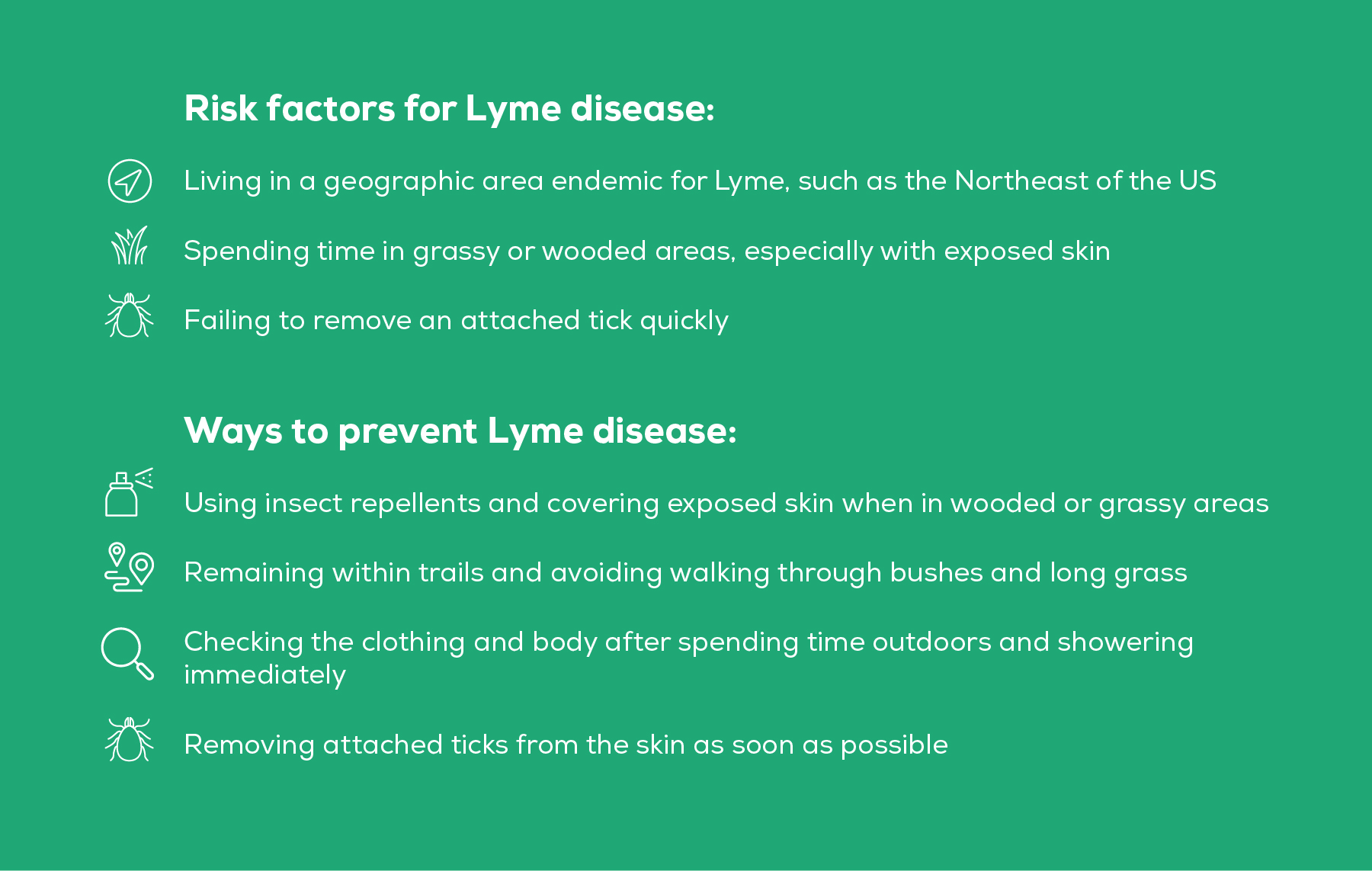 What is chronic Lyme?

Some Lyme disease patients experience long-term symptoms of pain, fatigue, and/or difficulties with concentration and memory even after standard antibiotic treatment and in the absence of evidence for ongoing infection. These post-acute sequelae of Lyme disease can be associated with considerable impairment in the health-related quality of life, but no established diagnostic biomarkers or effective treatments are currently available. Recent studies point to an association with immunologic abnormalities, including elevated levels of certain markers of inflammation, in affected patients. Some experts believe that these inflammatory responses may be responsible for some of the associated symptoms, while some have hypothesized that the symptoms may be a result of undetected persistent infection. The condition is usually called post-treatment Lyme disease syndrome (PTLDS) in the scientific community, although it is also sometimes referred to as chronic Lyme. However, the term chronic Lyme has become somewhat controversial, because it is also used by some to refer to a much wider spectrum of symptoms that may not necessarily be related to Lyme disease.

Future of Lyme treatment and care - where is the research headed?

Considerable active research is underway on the development of more advanced diagnostic tests, as well as therapies with enhanced efficacy. There is especially a need for improved diagnostics for early Lyme disease before the body generates detectable antibodies, as well as for PTLDS for which no specific biomarkers are available. Better diagnostics can improve treatment and avoid progress to later stages of disease. Some of the diagnostics under development involve the use of advanced proteomics, genomics, and metabolomics, among others, that can overcome the issue of the delay in antibody development by direct detection of bacterial molecules in blood or other bodily fluids, or by measuring changes in bodily processes in response to infection. Similarly, future drug therapies for Lyme disease may further reduce the risk of development of post-acute sequelae. Finally, there are a number of promising strategies for novel vaccines for Lyme disease that are in various stages of development. Once available, these can become an important element in the prevention of Lyme disease.

Only 70% of people develop the “bull’s-eye” rash commonly associated with Lyme disease after getting bit by an infected tick. So, if you think you've been exposed, and are suffering from symptoms like fatigue, headaches, or joint pain, our at-home Lyme Disease Test can help you find out if you’ve been exposed to the bacteria Borrelia burgdorferi, Borrelia garinii, or Borrelia afzelii.